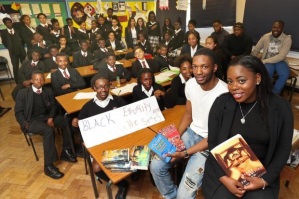 I moved to England at the age of five, although coming from a country where English is an official language, my English was not as advanced as my counterparts in this country. Upon arrival my teacher advised my mother to only speak to me in English and stop using Ndebele and Zulu to communicate with me. She refused. I am so grateful she did. Instead my mother turned to a different method, I had always loved hearing bedtime stories, my mother’s voice was very soothing, still is in fact. She would often tell me stories in our native tongue that her mother had told her. One night she told me that I would now read bedtime stories in English to her, whilst at first I disapproved of this method, I grew to appreciate then love this tradition with my mother. Thus my love of reading was born. That is one of my earliest memories, thus I often tell people I have always loved reading. Thanks to my mother’s rebellion from my year one teacher’s advice and her innovation, by the time I was six, I had the reading age of an eleven year old. From then my love of reading only grew, consequently I thoroughly enjoyed English lessons along with other classes including Maths . I didn’t always know I would study English in university, but looking back now it was one of the greatest decisions I ever made. Studying English has not only improved my communication skills but in general has made me more culturally aware, something necessary in the diverse world we live in. Studying English at university allowed me to learn that literature was diverse, and that not all literature was written by Europeans. That is one thing I can fault about the education system – often many children grow up with that myth.

This summer I went back to my former school to change that. Growing up I always loved school and rarely missed a day at school; as a result my school played a fundamental role in shaping me to be the person I am today. Holy Family is a great school with even better teachers who are passionate about what they do. So when planning my event I could not think of a better place to start.

I devised the Isocrates wider reading program in in order to encourage students to read books, which aren’t often present in the national curriculum.

With the help of my childhood friends we conceived a plan to work with key stage three students (year nine students) for three days in July. We introduce the children to literary theories including Marxism, Feminism and Postcolonialism.  When the children where asked to sign up, out of all the classes Postcolonialism proved to be the most popular. Thorough the project we familiarized the children with the theories and examples of texts, which collate with theorists’ ideas. Although the course heavily focused on the literary criticism of the former, we also taught the children how each theory related to society and its history.

There were about 70 children involved in the project. When we first met the children, most had been selected for the program. So not all where so keen to participate but after the first awareness meeting, the children seemed excited. It only got better as the program continued, each day the children where more interested, became better learners, social and literary critics. Another highlight was seeing the children realizing the power of literature and that most literary texts often have a social message. It was really interesting to see the thoughts of these year nine students, who where mostly 13 years old and ranged in ability. They all did so well in understanding these theories. It was amazing to witness the children grow in that short space of time, learning about theories and placing them in the context of their own lives, and thus assessing what role they play in society. I hope the children continue to explore other theories and texts outside of the curriculum and that they continue to realize the power one individual holds simply in their beliefs.

This experience has also aided me. As a literary critic, you are always growing and learning, being around such astute, creative and intelligent children was a great honour for which I must thank them, their school and their parents. Being around the children allowed me to reconsider these theories allowing for my knowledge to not only be strengthened but to grow. This knowledge will undoubtedly serve as helpful in my future studies.

We hope this programme is the first of many and one which can be extended across Waltham Forest and other boroughs of London. As a start-up charity, we couldn’t have done without the major support we received not only from our sponsors and the school but our two volunteers, double award winning actor Nathan Hector and the amazing Nego True who is a poet now on a sold out tour. I am so thankful for their time. I also have to say thank you to my team including my Vice President Mr Kalm Paul-Christian, and my Marxist coordinator Elliott Lazarus. We would also like to thank our local MP Stella Creasy for her support, who regretfully couldn’t attend the program but sent her profuse apologies and hopes to support our charity in future endeavours with our community.