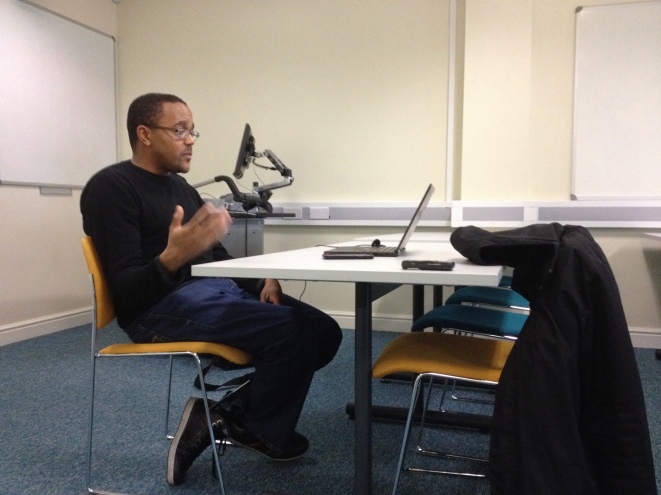 Dr Kehinde Andrews joined the NTU Postcolonial Studies Centre to give a talk on Black Radicalism and how it fuels a movement towards a new global identity. This identity is linked through a global diaspora and is rooted in difference that is not based on western constructs of race. Racial difference has been a cornerstone of Western Imperialism and dominance and was an excuse for the slavery and genocide of indigenous tribes and peoples around the world. Racial science is one construct of difference but there are others. The first Europeans in Africa were regarded by the Africans as different, but this difference was not based on racial categorisation.  Similarly when Africans made contact with Arabs and others there was an understanding of dissimilitude between cultures. Black radicalism moves beyond the use of racial categorisation as a means of defining difference, instead choosing to acknowledge difference. In doing so Blackness becomes an identity that is embraced.

The idea of Blackness stems back to Malcolm X who defined himself as ‘a new type of negro – a black man’. This rejects the old school of thinking that accepts the subjugation of black people in a European history. It becomes a radical way of thinking which links the African diaspora on a global scale. Kehinde spoke of a common bond between those within the African Diaspora, a historical bond that is grounded not through physicality and blood but through a different connection –  Spiritual Ancestry. Sub-Saharan African religions all operate under the schema of Ancestral worship.  Ancestral spirits are considered to be alive and are very much a function of  daily life.  This is opposed to Western perception of ancestors who are seen as dead.  Kehinde admits this is an undertheorized concept, but I believe it has potential to provide a interrelationship between those caught within the African Diaspora and their connections still in Africa.

In order to work, Black Nationalism needs to move away from the Nation-state and claim a Global Nationalism. For this to happen black nationalists need to rethink their roles within the nation-state. National politics is important – the day to day role of an activist helps change the dynamics of power on a local level but becoming part of Global Nation requires a dramatic shift in the way politics is perceived. Kehinde believes that black nationalism cannot be narrow – entirely focused on the nation state, nor can it be based on Cultural Nationalism. Both are limiting and are not radical in any form. Eventually Radical Blackness aspires to the overthrow the capitalist state and culminates in an African revolution. I believe that in order for any revolution to arise from Africa, African nations and the people that inhabit these nations need to overcome their lack of collective unity. They need to free themselves from Western labels and take on a new identity, a new title: Who knows, perhaps it will be Black.